When I was growing up most American kids dreamed about hitting a walk off home run in the World Series, or making a last second touchdown catch in the Super Bowl, or scoring a buzzerbeater three pointer in game seven of the NBA finals, but me? I dreamed of riding away from the peloton in one of the big European Classic races. Today The incredible Peter Sagan played out my dream to perfection in one of the greatest races in the world - The Ronde Van Vlaanderen. Even though he was the odds on favorite, it was still a mind blowing to watch. He is now climbing into rarified air and writing his name in the history books as one of the greatest to ever turn a pedal in anger. How far will he take it? Only time will tell but it would seem that nearly anything is within his reach. The immediate thoughts turn to next weekend and the rough the hell of the north that is Paris Roubaix. Can he pull off the double? It's a tall order for sure, but you will not find this writer betting against him. My thanks to Peter and the rest of the peloton for proving that despite rumors to the contrary, the beautiful sport of cycling is as strong as ever, and the future looks bright, very bright indeed.
Posted by Unknown at 2:06 PM No comments:

The skills to win the uphills.

Uphill sprints are some of the most exciting things in cycling. It's the perfect recipe for the most powerful riders in the peloton to showcase their skills and snipe wins from the climbers or true sprinters. These are the stages the rouleurs dream about and Peter Sagan is one of the strongest of these riders. He and Dani Moreno livened things up on the frenetic, twisty uphill finish of the third stage of the Tour de Suisse today. Click the pic for a link to Steephill.TV and a video of the final 14k.

It's just more evidence that this year's tour is shaping up to be a scorcher for all of the available jersey's. Peter Sagan seems to be letting his riding speak volumes about his desire to stake a claim to yet another green jersey.
Posted by Unknown at 10:08 PM No comments:

What happend in Leogang this weekend will be the stuff of legend. Aaron Gwin put on a show that defied logic and still has the mountain bike world shaking it's head. Check the link above to watch the best bits from the weekend, from there you can link to the full replay of Gwin's amazing run.

Posted by Unknown at 6:43 PM No comments:

Alex Hiam just dropped a scorching set of bangers via Fox MTB. Get 'em while they're hot by clickin' on the pic.

Enjoy!
Posted by Unknown at 5:37 PM No comments:

This is the Bicycling Life. You give all you have for over a week in one of the most prestigious cycling tours on the Pro calendar only to have the yellow leaders jersey ripped from your back on the final kilometers of the final climb on the final day of the race. Tejay Van Garderen is not the first to live through this fate, but that doesn't make it any easier.

The Dauphiné Liberé is on a level bested only by the 3 great grand tours in the hearts and minds of the professional peloton. For 8 days each June it works it's way through the beautiful French countryside incorporating many of the same climbs that feature in Le Tour de France each July. Many of the previous Dauphiné winners have gone on to also wear yellow on the last stage of Le Tour. Tejay had hopes of adding a win here to his palmares which would have easily been the best victory in a career that has been consistently trending upward since he entered the professional ranks.

He started the day in good shape to do just that. With a lead of 18 seconds on Chris Froome all he had to do was stay in contact with the Team Sky rider's wheel on the Modane-Valfréjus, but the Briton attacked on the days final climb after Wout Poels softened up the peloton with a brutal pace on the lower slopes. Tejay was game and much like yesterday marked Froome better than the other contenders but he lost contact on the steeps and came in 18 seconds behind. That left he and Froome tied on time at 30 hours, 59 minutes and 2 seconds; the Team Sky rider's victory afforded him 10 seconds bonus however - which would prove the deciding factor for victory.

It's Froome's 2nd Dauphiné win in 3 years and bodes well for his chances in this year's edition of the Grand Boucle. It also bodes well for those of us waiting for what looks to be one of the best fields of competition in the Le Tour for years. Froome, Nibali, Contador, Quintana are the favorites but there are a handful of riders like Van Garderen who have high hopes and a real opportunity to crash the party. Let's hope that all of the key players can stay upright and healthy for the length of the tour and provide excitement and intrigue deep into the final week of the race.

Is it just me? 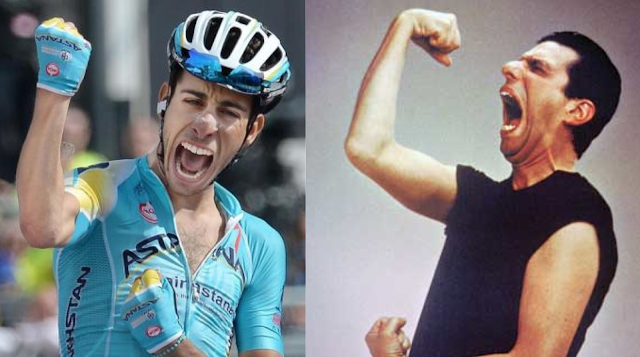 Fabowser.
Posted by Unknown at 12:44 AM No comments:

On any other Sunday, the big story of this photo would be Mark Cavendish winning easily and coasting to the line with a beautifully casual arms wide out pose. It would be about how he utterly dominated the green jersey competition of the 10th edition of the Tour of California, winning four of the 8 overall stages and all of the flat sprints. It might have even been a little bit about how his victories were slightly hollow due to the true sprint class of the pro peloton being scattered about the globe in a number of other races. But this wasn't any other Sunday and Cav, despite the truly impressive heroics of his past week, will go down as merely a footnote in what was the real story of America's (arguably) best pro road cycling race - Peter Sagan.

The week started auspiciously for the affable Slovakian. A hard fought second place to Cavendish in stage one should have been a positive beginning for Sagan especially considering he is not a pure sprinter. However; any positivity to be taken from that finish was shattered when his boss, Mr. Olev Tinkoff (the namesake of the Tinkoff-Saxo team that employs young Peter) decided to take to twitter to light a fire under his star rider's prodigious glutes by calling him out for not winning. Tinkoff was taken to task by much of pro cycling's fandom (many devout Saganites no doubt) who politely and not so politely told him where he might want to put his head and what types of things he might want to put in his mouth. Some said he was merely trying to spark Sagan. Whether he was or not something definitely clicked for the kid and he went on a tear that is not only the story of the cycling year so far, but might just be the moment that the trajectory of everybody's favorite all-arounder's career took a significant turn.

It has always been my opinion that Peter Sagan was meant to be more than just the best all around rider, or rouleur, or puncheur or green jersey challenger, or the replacement for Jens Voigt as America's favorite european cyclist. I have always felt that with just a small change in disposition and training he could add a bit more climbing ability to balance out his other prolific talents and could be a force to reckon with on some of the premier mid length stage races such as Paris-Nice, Catalunya, Pais Vasco, Romandie et al. Sure the Dauphiné and Suisse tours might be out of reach because of the amount and grade of climbing and I don't seriously see him winning any of the grand tours, but outside of that I think anything is within his reach. After today's amazing finish at the TOC, maybe Sagan feels the same.

Today's excitement doesn't happen without Sagan's incredible effort in yesterday's stage 7 however. On the winding road up the face of Mt. Baldy Sagan put in an effort that few would have believed possible when he clawed his way up the queen stage of this years race. Not only competing with, but actually defeating some of the best pure climbers in the world to finish 5th at the summit. As expected he gave up the leaders jersey but completely unexpected was the finishing sprint he mustered to close the gap between himself and French phenom Julien Alaphilippe to only a miniscule 2 seconds. That meant with 2 opportunities for time bonuses up for grabs on today's 8th and final stage from Downtown L.A. to the 10 lap finish at the Rose Bowl in Pasadena that he was now arguably the favorite to win his first UCI elite level tour.

As is par for the course with the young Slovakian he made it as exciting and nail biting for his fans as it possibly could have been. With the aforementioned Cavendish working hard at the front to steal bonus seconds from Sagan for his teammate Alaphilippe, it would come down to the finishing sprint on the 10th lap around the iconic stadium before anyone would know who was going to finish on the top step of the podium. Multiple breaks on the circuit kept the pressure on Tinkoff-Saxo to keep Sagan simultaneously in the race and out of trouble. Whether the French neo-pro or Sagan would finish first was not in question, we all knew that Julien would have nothing for Peter in the sprint although he gamely hung tough on the Tinkoff-Saxo rider's wheel for as long as possible. No, the real question was would Sagan finish third or better to gain the needed seconds to wrestle away the top spot of the race for himself. Cavendish and Dutchman Wouter Wippert left no doubt about first and second place and Amercian Tyler Farrar put in a huge effort for his MTB-Qhubeka team and nearly wrote a completely different story that Julien Alaphilippe would have no doubt preferred.

At the end of the day and the end of the race it was just a centimeter or two that fit multiple fortunes within their length. The reality is that Sagan put on a show for the ages and made the American cycling fans even crazier than they already were for him. He pipped Farrar with a textbook throw of his bars at the perfect time to capture the final spot on the podium and the needed seconds to secure the overall victory. He also helped his boss shove his foot firmly and deeply in his mouth. It's a taste I'm sure the Russian will gladly endure and hopefully he'll take to twitter and interviews with as much praise for his star rider as he did with criticism earlier in the week.

A hearty cheapeau to Etixx Quickstep riders Alaphilippe and Cavendish for amazing performances in their own right. On any other Sunday it would have been quite a celebration for the Belgian team...